That was the order of the day for our East Coast Cruise.  We left on Sunday 8th April on a forecast of flat calm, variable wind and fog patches.  Fog is not really a problem to us, particularly as we have just fitted Evita with a super new HD Radar from Raymarine & our Sealine T50 support boat was also Radar equipped. 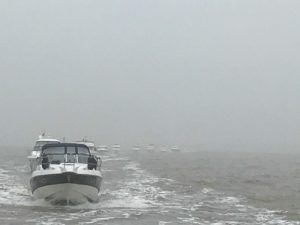 In reality, once south of Lowestoft the fog wasn’t so much patches as one great patch that spanned beyond Orfordness.  The sea was flat calm however, we ran at slow speed – 8 knots plus a push from the incoming tide & our new electronics performed beautifully.  Having spoken to Harwich VTS, we knew the visibility inside the Harbour was reasonable and that there were no big traffic movements planned so we were confident that we would have no problems on arrival.

Our 15 strong fleet stayed together really well running line astern of each other and we passed Felixstowe and into the Orwell at around 1630hrs.  We spent our first night at Woolverstone Marina and enjoyed a super night at the Riverside Restaurant who fed us and looked after the 44 of us very well.

The following day the fleet left for Ipswich after the NYA Running Club had huffed and puffed their way down to Pin Mill and back whilst the rest of the fleet nursed their hangovers.  The ABP Ipswich Haven Marina were accomodating as ever and we enjoyed two nights there.  On Wednesday we had hoped to have a run to Burnham on Crouch but in addition to fog, we now had a 1½ metre swell on an Easterly breeze so back to Woolverstone it was & Clare at the Riverside Restaurant came up trumps and organised food for us again.

Thursday morning dawned and a heavy mist lay across the River Orwell.  We had made plans for Titchmarsh with once again fog patches in the forecast.  We checked with the Harbour Master who confirmed that at that stage visibility in the river was reasonable.  We pushed on out of the Harbour and into some fairly poor visibility as we made our way from Pye End Buoy into the Walton Beckwaters.  Once again the whole fleet did a great job of navigating their way up the buoyed channel and up to Titchmarsh Marine for a night.

On Friday morning we awoke to a significantly better forecast of light South Westerly winds and enjoyed a lovely run up to Southwold at 18 knots and NO FOG.  We were there by 1100hrs so the crews got the opportunity to enjoy a day in Southwold before leaving for our final run to Great Yarmouth and back onto the Broads on Saturday afternoon.

Going to sea this early in the season always brings the chance of fog but whilst it certainly slowed us down, all of the skippers reported that they had enjoyed the challenge and had learnt a lot.  As ever we had a lot of social fun too along the way and made new friends.