The start to our Belgium cruise was not the easiest to organise.  With the Haven Bridge out of action & limited moorings available in Lowestoft, it took several phone calls to put things in place.  The Mutford Lock were good enough to put 13 of our 14 strong fleet through in one day, the 14th managed to slip under the Haven Bridge at low water on Friday afternoon.  By 1900hrs the whole fleet were moored at the Royal Norfolk & Suffolk Yacht Club & enjoyed the usual hospitality provided by the Lowestoft based club.

The following morning the fleet departed the yacht club basin at 0545hrs for the passage to Oostende of nearly 100 miles.  The weather forecast was for south westerly force 2-3 but picking up to force 4-5 in the afternoon on the Belgium coast, hence the early start.  A few early mechanical issues on a couple of boats requiring engineering assistance from our support team lost us about 45 minutes but eventually the fleet ran well.

By the time we closed the Belgium coast, the wind had freshened considerably and was picking up a short chop giving a bouncy ride and covering the boats & flybridge crews in salty water.  The fleet took it in its stride and locked into Oostende at around midday (UK time) and enjoyed a relaxing afternoon.  On Sunday evening all of the 43 crew members met at the Boltleje Restaurant in town for a very enjoyable meal, drinks and much hilarity and we were very well looked after. 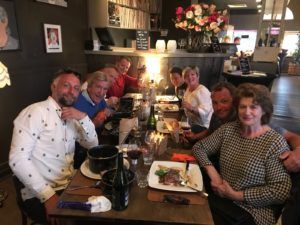 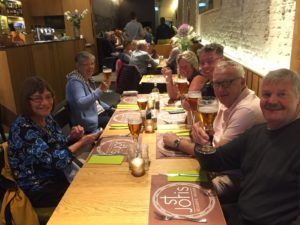 On Tuesday most of us took the train to the very pretty town of Brugge for sightseeing and shopping. 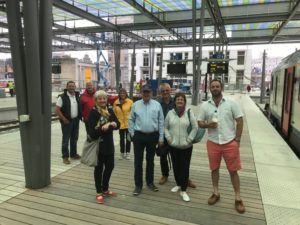 We left Oostende on Wednesday for Middelburg in Holland.  We locked out and made the 30 mile passage to Vlissingen lock and then up the Middelburg channel.

Middelburg is a picture postcard town with lovely moorings just outside the town centre and a super, historic yacht club opposite the moorings.  Some of the fleet spent two nights here and some three before all meeting up again at Delta Haven Marina on the Veerse Meere at Kortgene. 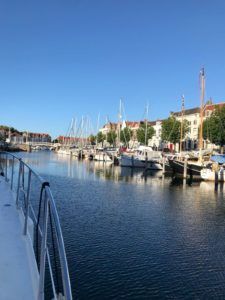 All the crews gathered once again for a meal at the marina restaurant. 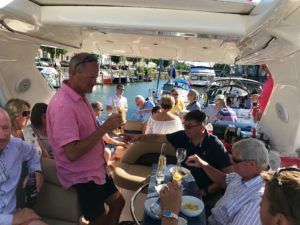 We moved on the following day to Roompot Marina on the Osterschelde in readiness for an early morning start for passage across the North Sea on Sunday.

The crossing was uneventful and the fleet ran really well at around 18 knots arriving i Lowestoft at around 1030hrs.

Getting back onto the Broads, well that is another story, with both Haven Bridge and Mutford Road Bridge out of action as I write on Monday afternoon, only two of our 14 strong fleet are back on the Broads, the rest moored in Lowestoft awaiting news!