The forecast in the lead up to our Easter Cruise was pretty depressing.  Strong easterly winds as far forward as we could see. 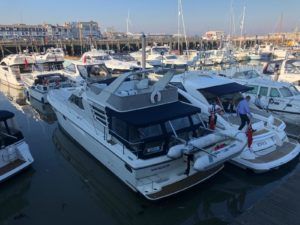 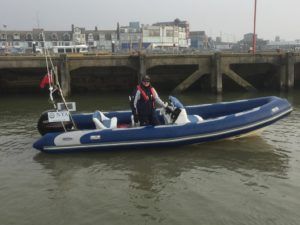 We took the decision to delay the start of the cruise and the passage to Ipswich which had been planned for Monday 15th of April.  James decided to take the lead boat ‘Enya’ down to Lowestoft via Great Yarmouth making use of our bridge booking.  In the event a few of our more experienced skippers decided to take their own boats by sea to Lowestoft at the same time.  The weather was grey & overcast with an easterly F4-F5 blowing and around a metre of swell.  Not challenging for the boats but not what many of our members would enjoy.  A few other boats made the trip t the Royal Norfolk & Suffolk Yacht Club over the next couple of days and by Tuesday evening all 17 of the fleet were moored in Lowestoft and enjoying the hospitality of the RN&SYC Clubhouse.

During the briefing that evening, cruise leader James explained that there was an improved forecast for the following day meaning an Ipswich run on the Wednesday was possible albeit with a one metre swell until we got further south.

The next morning a couple of boats decided to stay in the comfort of the marina whilst the other 15 untied and made their way out of the harbour behind Enya.  The conditions were exactly as forecast although the fleet took it all in their stride as we made our way down the stanford channel.  By the time we passed Sizewell, running at 18 knots, the sea state was very pleasant and continued to improve as we made our way round Orfordness & onto Harwich.

The sun was trying very hard to come out as we squeezed all 15 of our fleet into the lock at Ipswich.  By the time we had moored up in Ipswich Haven Marina it was shining nicely & we shared a few ‘safe arrival’ beers! 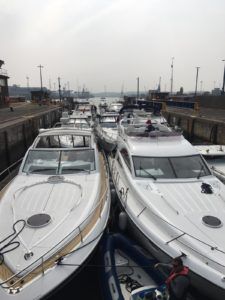 With no group plans for food the crews mixed up in small groups at the many & varied hostileries & eating establishments that Ipswich has to offer & awoke in fine form on Thursday morning ready to depart on free flow at a very leisurely 12 noon.  From there we travelled the short distance down the Orwell & under the Orwell Bridge to Woolverstone Marina.  By now the weather was getting decidedly warm and the forecast was looking really good.  This left many with a wardrobe full of jumpers they wanted to swap for t-shirts!  A walk to the Butt & Oyster was the order of the day for some whilst others socialised at the marina restaurant. 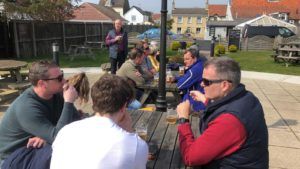 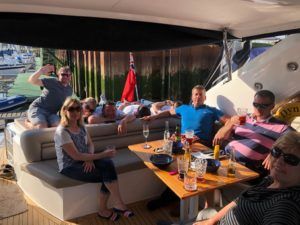 The next destination was the Tidemill Yacht Haven on the River Deben.  The fleet departed at 0900hrs to allow for the tide at Woodbridge Haven & to cross the tide sill at Tidemill Yacht Haven.  After an hour or so’s run up the picturesque Deben, we arrived at Tidemill at around 12 noon leaving the fleet a full 48 hours to enjoy Woodbridge in the sunshine and enjoy it we did.  All too soon it was time to leave.  On Sunday 20th April the fleet watched as the tide crept up over the sill and as soon as it reached 1.4 metres depth, we departed for Lowestoft.  We arrived at the RN&SYC and were made fast by 1700hrs in time for farewell drinks & a super carvery meal in the clubs historic dining room. 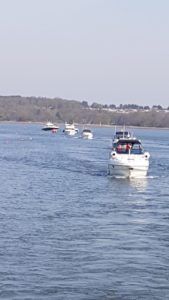 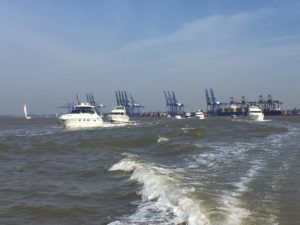 The fleet departed Lowestoft on the Bank Holiday Monday morning with the sun still shining and a flat calm sea as we made our way back up the coast to Great Yarmouth & onto the Broads.

We couldn’t quite believe the weather had so kindly changed for us.