The skies were a little over cast with sunny spells as the flotilla gathered on the River Bure last Friday but that certainly didn’t dampen spirits. Crews attending the NYA Cruising Club Southern Rivers Cruise met at the entrance to Ferry Marina and departed downstream at 1330 bound for Acle. 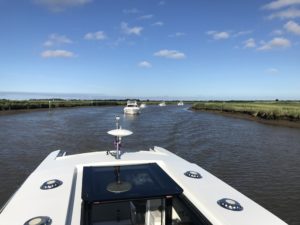 The passage under Acle Bridge was uneventful with a clearance of plus 12’ some boats didn’t really need to lower much in the way of canopies and arches. The larger air draft vessels using the opportunity to practice their drills in readiness for the Vauxhall Bridges in Great Yarmouth.  As we approached Great Yarmouth the Cruise Leader called ahead to the Yacht Station in order to check the bridge clearance. All was well and the Flotilla successful made their way through and onto Breydon Water. 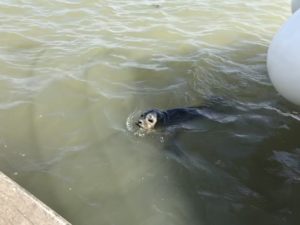 Breydon was empty of hire craft which presented some skippers with the opportunity to up their speed and stretch their engines.  On crossing Breydon Water skippers fell in astern of the Cruise Leader and continued their passage along the River Yare to Reedham New Cut.  The sun had made an appearance by now and crews enjoyed a leisurely pace along the New Cut. Evita’s tender an Avon Sea Sport 4m Rib was with us, carrying the mantle in lieu of her mothership and was given the call sign ‘Evita Two’ for the duration of the cruise. She came in very handy ferrying Chris Cooper amongst the fleet and even delivered coffee to the tail end ‘sweeper’ support boat crew!  Somerleyton Swing Bridge was in full working order and opened after a short wait. The boats arrived at the Waveney River Centre at approximately 2015hrs. 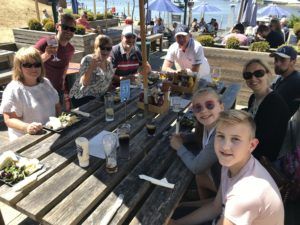 Saturday was a free day with no itinerary. Some boats ventured up the River Waveney to Beccles, others along to Oulton Broad. Some simply enjoying the relaxed atmosphere of WRC.  Saturday evening we were treated to a superb BBQ catered by the Waveney Inn. With steak, chicken, prime sausages and burgers plus salads and fries, crews certainly didn’t go hungry!

Sunday we departed WRC at 1030 in order to assure a passage through Somerleyton Bridge. Again the Cruise Leader spoke with the Bridge keeper ahead of arrival. It was noted that Rail workers were dousing the rails with water in order to keep them cool. Crews were very grateful as shortly after our transit the bridge was closed to river traffic as a result of high rail temperatures. 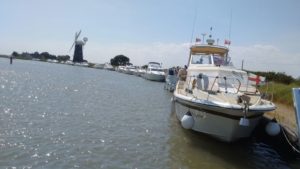 Our homeward passage took us back along the New Cut to Reedham and onto the River Yare heading downstream with the tide. After a layup stop at the Berney Arms moorings the flotilla again took to Breydon Water, under the Vauxhall Bridges and on to the River Bure.  Some boats stopped at Acle on the return leg and enjoyed a night at Pedros Restaurant. Others continued on toward their home berths.  The support crew arrived back at Horning around 1030hrs on Monday morning full of stories of the weekend socialising. It would be fair to say a good time was had by all. 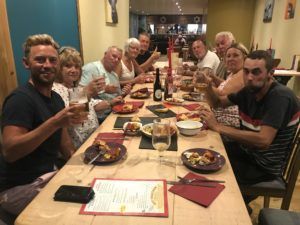