Having had to cancel our plans for a September cruise to Wells-Next-the Sea, we altered the destination to Woodbridge on the Deben instead.  This disappointed several people who were looking forward to North Norfolk and depleated the number of boats on our last cruise of the season.

We departed Great Yarmouth on Thursday 6th September on a 1500hrs Haven Bridge lift bound for Lowestoft with a fleet of 7 boats plus our support RIB.  The wind was a breezy Force 4 to 5 but blowing from the west so the sea state was very pleasant.  The fleet enjoyed the short run to the RN&SYC at Lowestoft and also enjoyed a very pleasant evening meal in the club. 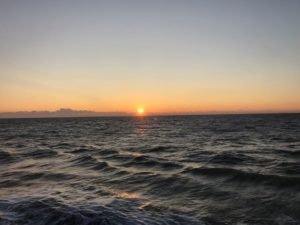 Everyone was early to bed in readiness for an early start on Friday.  At 0445hrs the VHF radio briefing was issued from Evita confirming the Shipping Forecast and the plans to leave at 0500hrs.  With the sunrise still one and a quarter hours away, the fleet departed Lowestoft Harbour in the dark.  The sky was clear and the dawning of the sun was beautiful as it appeared over the Eastern Horizon.  The small fleet performed faultlessly as we made our way to the Woodbridge Haven buoy and then up the Deben to the lovely Tidemill Marina, arriving just after 1000hrs. 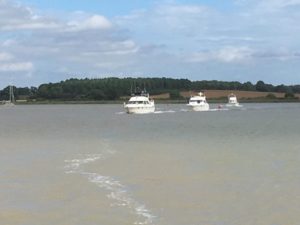 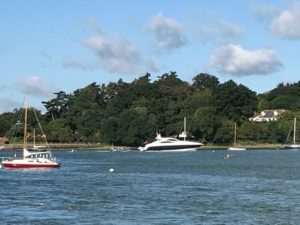 After a ‘restful morning’ all the crews gathered on Evita for a very convivial drinks party before going their separate ways to eat in the plentiful excellent restaurants of Woodbridge.  The following day we relaxed & explored, meeting for a super meal in the Crown Hotel in the evening.

We returned to Great Yarmouth on Sunday.  Once again the weather was a breezy Force 4-5 but now had kindly swung around to the South West giving the fleet a very comfortable and most enjoyable ride home. 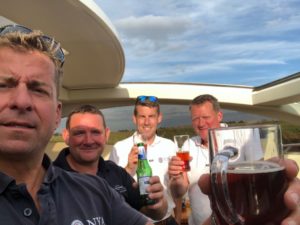