To most people, the Norfolk Broads is a place for the summer, for long days on tranquil waters under broad skies. But Graham and Debbie Eames love spending time on their boat, the Hyperion, so much that they visit all year round, even when the night frosts leave a crackling of ice on the still water’s surface.

Graham, who has had a long association with the Broads since first coming on holiday to Norfolk in the 1970s, says the place has a special aura, whatever the season. “Friends come down here and they are gobsmacked by it,” he adds. “They are flabbergasted at how beautiful and peaceful it is. We had a day at Ranworth in January – there was only one other boat there. It was cold that night and when we woke up the next morning it was sunny but frigid and the Broad had frozen a quarter of an inch thick. It’s lovely in the summer, but we come all year round unless it’s really stormy weather.” 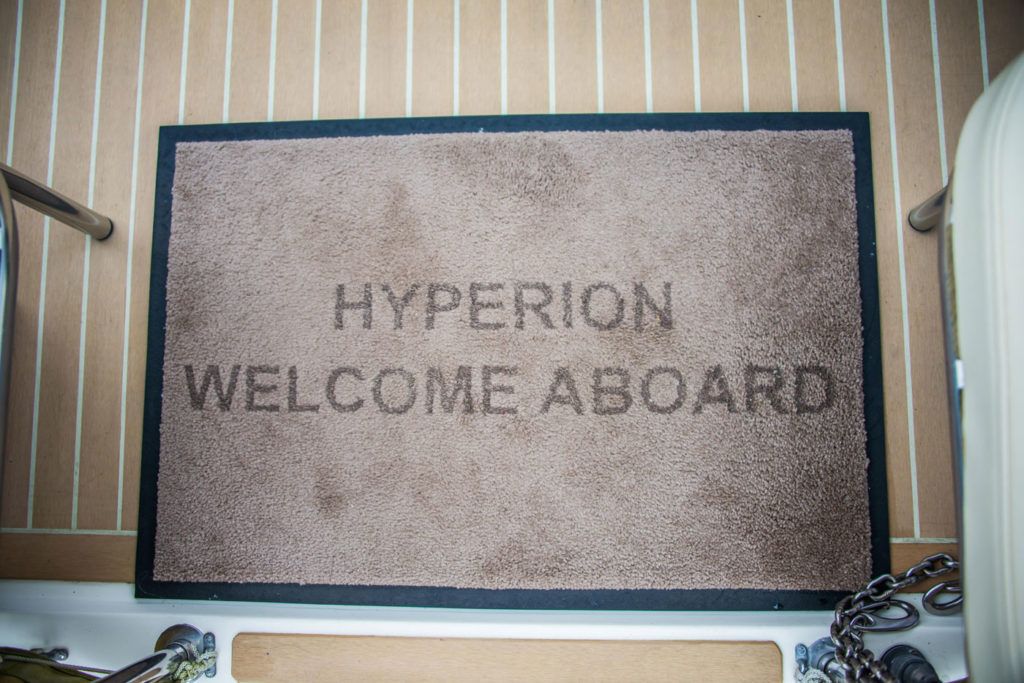 The winter nights have other benefits in one of the darkest places in the country. “We can go and sit on the deck at night and the stars are fabulous because there is no light pollution,” says Graham, 70, who worked in the refrigerated transport industry before retirement. Wife Debbie, 48, a project manager at Mars UK Petcare, adds: “We’ve been up until 4 am just looking at the stars. It’s beautiful.”

Brought up in a narrow boating family on the canals, she is a convert to the more wide open spaces of the Broads since the couple bought their first boat together in 2013. “I had quite a few narrowboat holidays and my mum and dad owned a narrow boat,” she says. “I loved it, I liked the slow pace of it. One benefit canals have over the Broads is that you can hop off at one bridge, go for a walk and jump on again at the next bridge. But I love it here. I work five days a week in quite a pressured job, and come down here at weekends and switch off, bring a book down or play cards. We had friends down for the day and they just could not get over how much beauty there was in the UK. You can’t see the Broads on the roads and they could not believe there was a place as beautiful as this hidden away just two hours from where we live.”

The couple, who live in south Lincolnshire, had been friends for many years before getting together about 10 years ago, marrying in 2011. And while Graham had owned several boats over the years, their first boat together was a Freeman 27 cruiser bought in 2013. “We were down here on holiday,” says Graham. “We’d rented a house in Horning with family and been for days out on boats. We came down and saw a Freeman 27. I knew from back in the day they were really nice boats to buy and quite cheap for what you get, but it was alive with spiders. It was like a spider colony and I have a severe intolerance of spiders.” Thankfully, another Freeman was available from Norfolk Yacht Agency with fewer arachnid guests.

“The woodwork was fabulous,” says Graham. “It was immaculate, exactly what we were looking for.” It was Debbie’s first boat, bought the day before a long-planned holiday to Spain. “We put the money down on Saturday, flew out on Sunday and spent the whole of those 10 days wishing we were here with the boat!” she says. “It was really exciting. We spent the time thinking of names and settled on Wild Rover after a song at our wedding.”

After a couple of years, Graham and Debbie needed something a little bigger to cater for friends wanting to stay over and to satisfy Graham’s desire for something that looks more like a “boat boat”. Again, NYA had the perfect boat in stock, a 1985 Broom 10-70 they christened Hyperion – the mythical Sun God – after a battleship in an Alexander Kent (AKA Douglass Reeman) historical novel, Form Line of Battle! “We couldn’t easily have people stay over, and this was so well looked after and gave us the accommodation we needed, sleeping four to six comfortably,” says Graham. “It was lovely because it meant I didn’t have to make beds every day,” adds Debbie. “The Wild Rover was one big cabin so every day I had to make the bed up. I was really excited about getting a bigger boat. It’s so quiet you can hear the wash on the water – travelling at river speeds the boat is very, very tranquil. I love the space, and this is our home from home.” 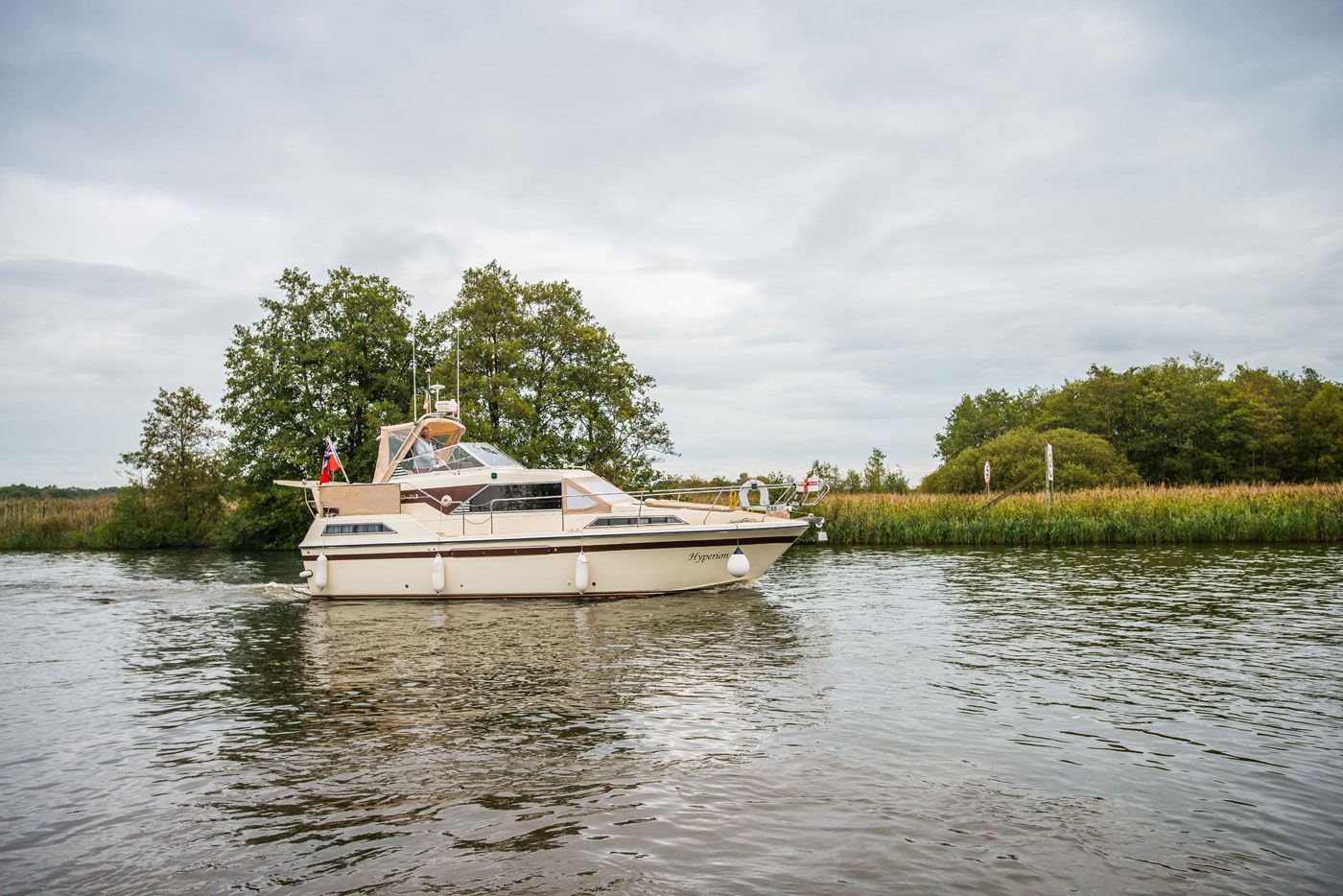 At 35ft and with twin Volvo engines, Hyperion also gave them the chance to tackle the open waters of the North Sea. “Just sitting on the boat pootling up the river with the engines burbling is all right, but the challenge of the sea is fun,” says Graham. “She’s so smooth at higher speeds and she flew across Breydon Water.” Neighbours and friends Mick and Pam make the trip to Horning to help crew the boat on its trips to sea, which are a world away from the gentle cruises on the Broads. Coming into Great Yarmouth harbour was like stepping into a giant washing machine,” says Debbie. “The boats in front slowed down, which wasn’t helpful – it was like being in a whirlpool. Mick and Pam love the boat – we sit in the cockpit or down below and have a drink, and you get this sense of wellbeing. “It’s so relaxing and you can feel your blood pressure going down. When it comes to Sunday afternoon I hate the idea of going home.” 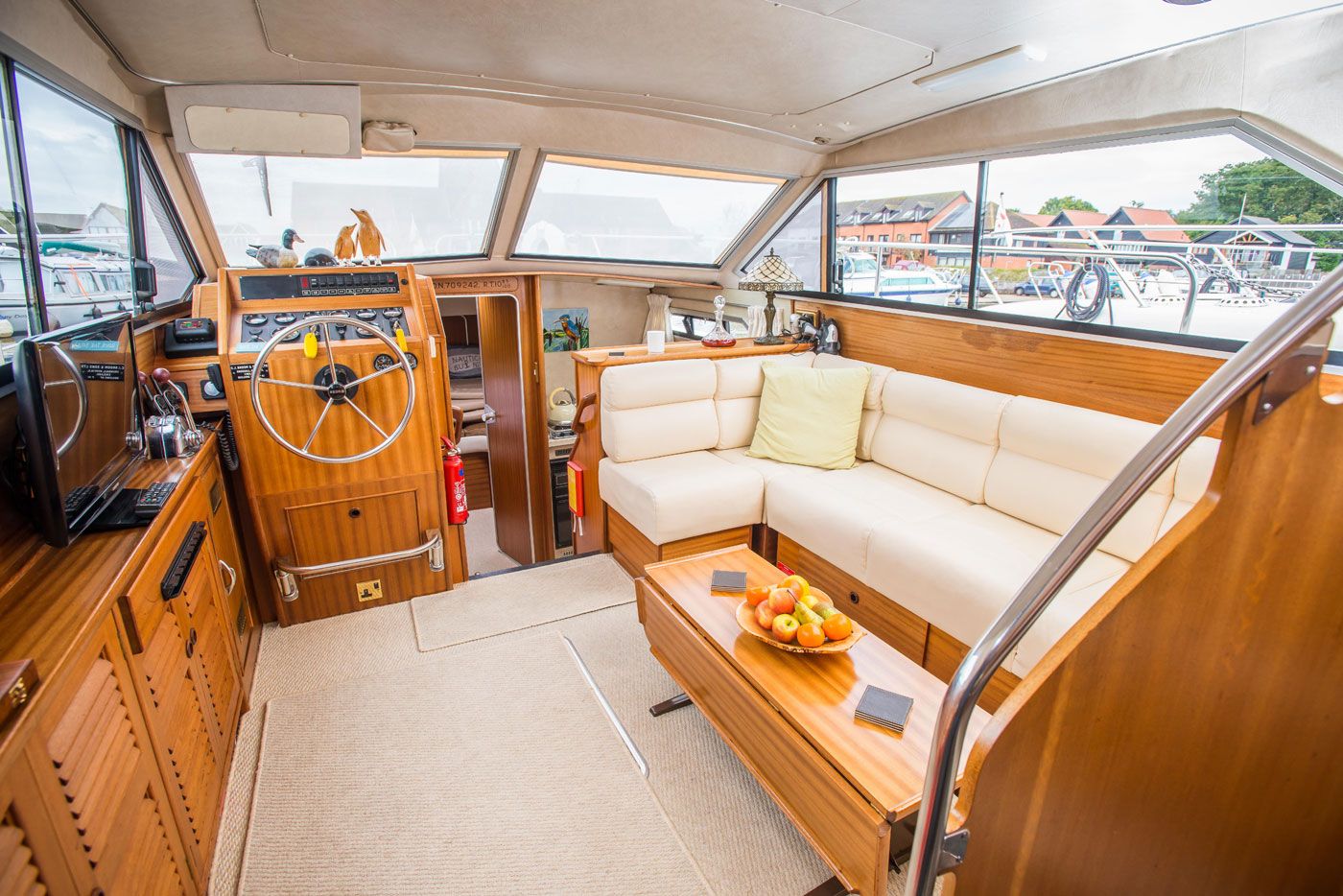 A sea-going Princess 33 followed in 1995, and a Fairline Turbo 36 two years later, brought back by road from Dartmouth. “At the time it was the biggest boat in the marina – it was as smooth as silk,” says Graham, for whom the boat was not only an escape from a busy career but the perfect place to entertain. “Many customers were friends as well, and we would invite them down for the day, they’d bring their kids down and let them go out in the dinghy. That would probably be called corporate hospitality now, but in my day it would be just having a nice day with friends. In high-pressure jobs in business, it’s very important to get away from it and being on the Broads allowed us to switch off. There’s so much time to do nothing. You start thinking about things in a better way and come up with better ideas, and go back to work refreshed, with new ideas to drive everyone mad with.” 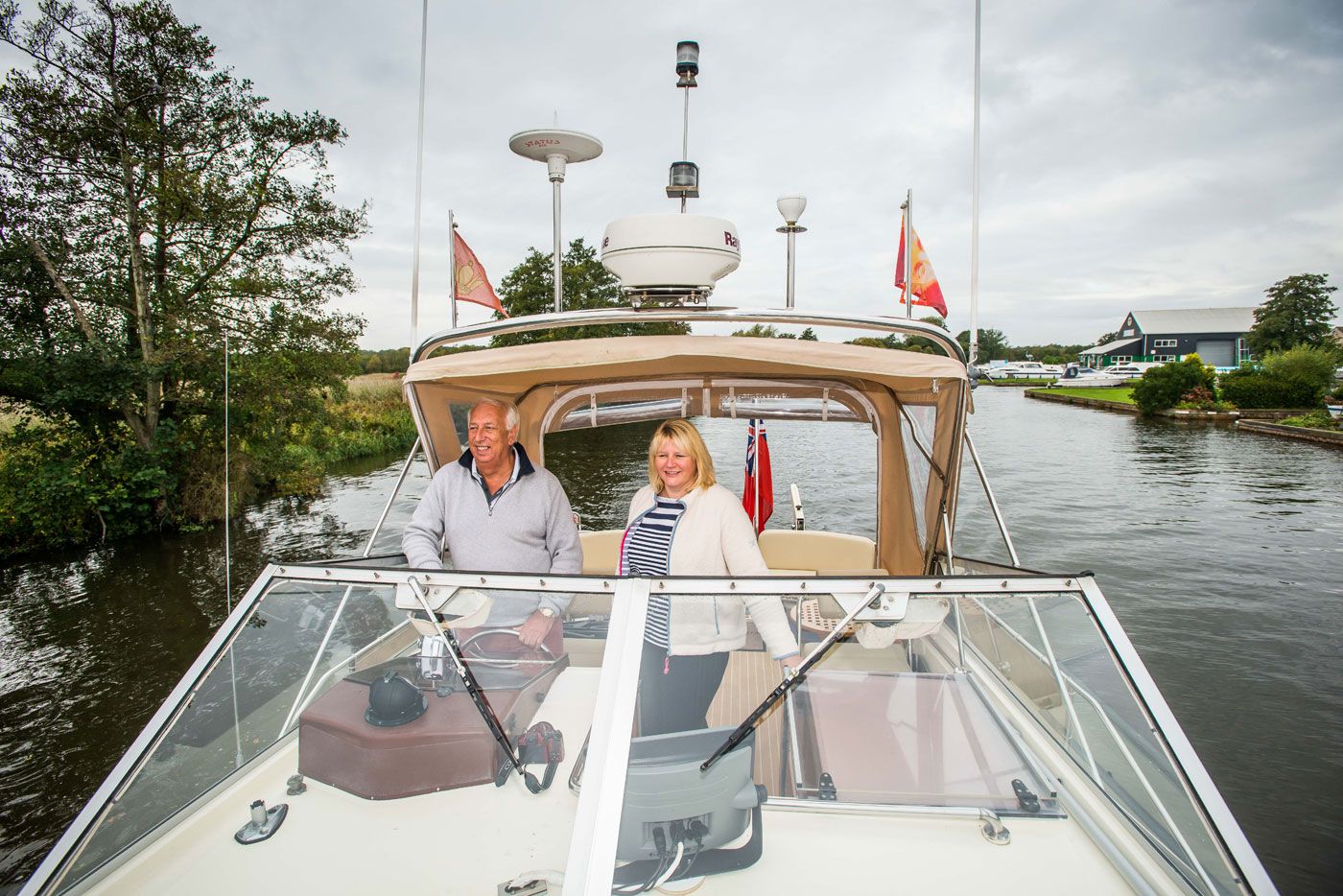 As well as the sheer relaxation, boating on the Broads has its lighter side, and seasoned people-watcher Graham has seen more than his fair share of mishaps as, usually, holidaymakers struggle to get to grips with the finer points of boating. They are the type of incidents that would end up on You’ve Been Framed or, in this age of the smartphone, going viral on social media – and a reminder that safety is a serious consideration on the water. Thankfully, no-one was injured in the making of these anecdotes, all of which no doubt added to the hapless participants’ holiday adventures.

“We were sat at Ranworth one day and two big holiday boats came in with families on board,” says Graham. “They anchored alongside each other and the people on the first boat were out on the deck. I was sitting watching, and sometimes you just sense things. For some inexplicable reason, they were getting into a pickle tying one boat to the other. It should be very simple but they weren’t doing something right. This lad pushed his way past the adults to help, grandma steps back to get out of his way and steps straight off the side of the boat. They were trying to pull her out over the front bow. I was horrified but it was also hilarious at the same time.”

On another occasion, a hen party was having trouble pulling up the mud weight. “Three of them couldn’t shift it,” remembers Graham. “Then one of them had a lightbulb moment, and one of them ran back to the helm and put the boat into reverse so it would pull the anchor out of the mud. One of the remaining two stepped back but the other held on to the anchor rope and went straight over the bow.”

Again at Ranworth, a yacht with a large wooden boom swept a man cleaning his boat clean off and into the water, while a stag party with one wearing a chicken onesie came to a cropper while trying to moor at a pub. “It was a stag boat and they were all wearing onesies and cavorting about,” says Graham. “As was inevitable, the stag wearing a chicken onesie fell off the back. There were two trying to lift him out, and one went down with him. Everybody rushed to the back to get him out, including the one supposed to be steering, and they started heading towards the bushes. I was too far away to shout.”

Ultimately, though, for Graham and Debbie, this is what the boating life is all about: a combination of fun, relaxation, incredible scenery and the distinctive wildlife that all goes into making the Norfolk Broads unique. “I love seeing people enjoy themselves,” says Graham. “It’s great seeing kids doing things they would not normally do at home. Some days you can just sit back and watch the wildlife. We have friends who come down and feed the ducks with us – they’re always surprised at how close the wildlife gets. There’s a goose called Limpy because it’s got a damaged wing. It’s been there for years and if we don’t feed him he taps on the side of the boat with his beak.”

To Graham and Debbie, the Hyperion – this floating home from home – is the perfect bolt-hole on the beautiful Broads. “It’s like having a two-bedroom cottage on the Broads riverside for a fraction of the price, and you can move it and you don’t have to mow the lawn!” says Graham. 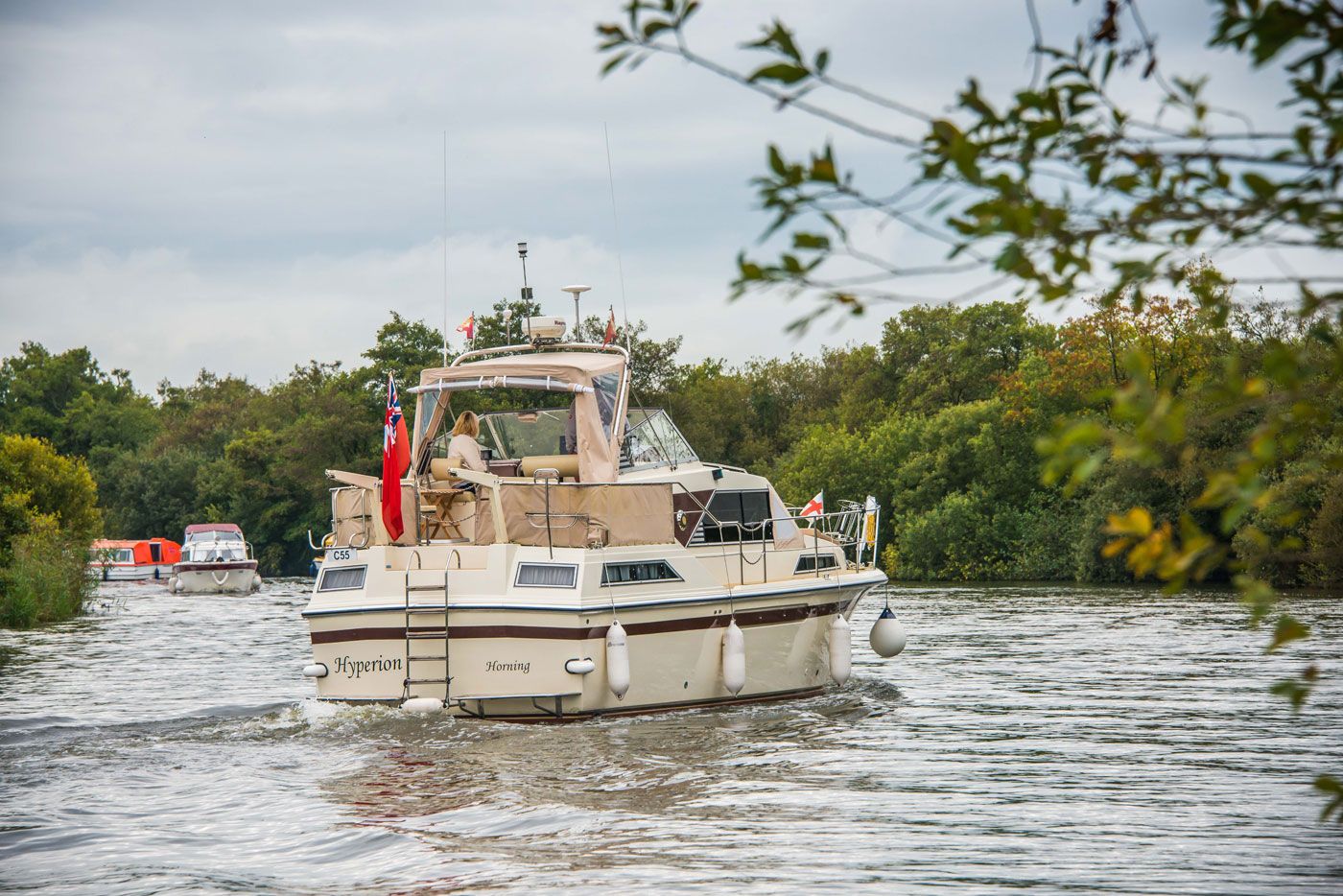