Eleanor loves the rainbows conjured in the sea spray on a sunny day. Little brother Ben likes the adventure but claims the bumpy seas make him feel sick. Dad Sean smiles and shakes his head, a silent “no it doesn’t” as the Gregory family decamp from their Sealine F43 into the Reedham Ferry Inn, a historic pub that’s been serving thirsty boaters since the 1770s. The sun is setting over the reeds that give the Norfolk village its name on a glorious autumn day, and the Gregorys have just returned from a late-season trip to Southwold with friends.

Seven-year-old Ben is clutching a travel chess set, and clearly wants to get down to business, but mum Hannah deftly distracts him and explains just how buying a boat in the summer of 2015 has changed the family’s lives. “It’s definitely opened a whole lot of new horizons,” says Hannah, 43, a human resources specialist. “For the kids, it’s sheer, pure happiness. You can see the joy on their faces, and it’s really good for them because they also have to learn very strict rules, like wearing life jackets all the time. I think they like the adventure of sleeping in their bunk beds, seeing their mates during the day, and staying up late at night. Eleanor, in particular, loves it. Such happiness. We’re giving them really great memories, and it’s really special. They know they are extremely lucky to be part of something like this. We’ve all seen things we would never have seen otherwise.” 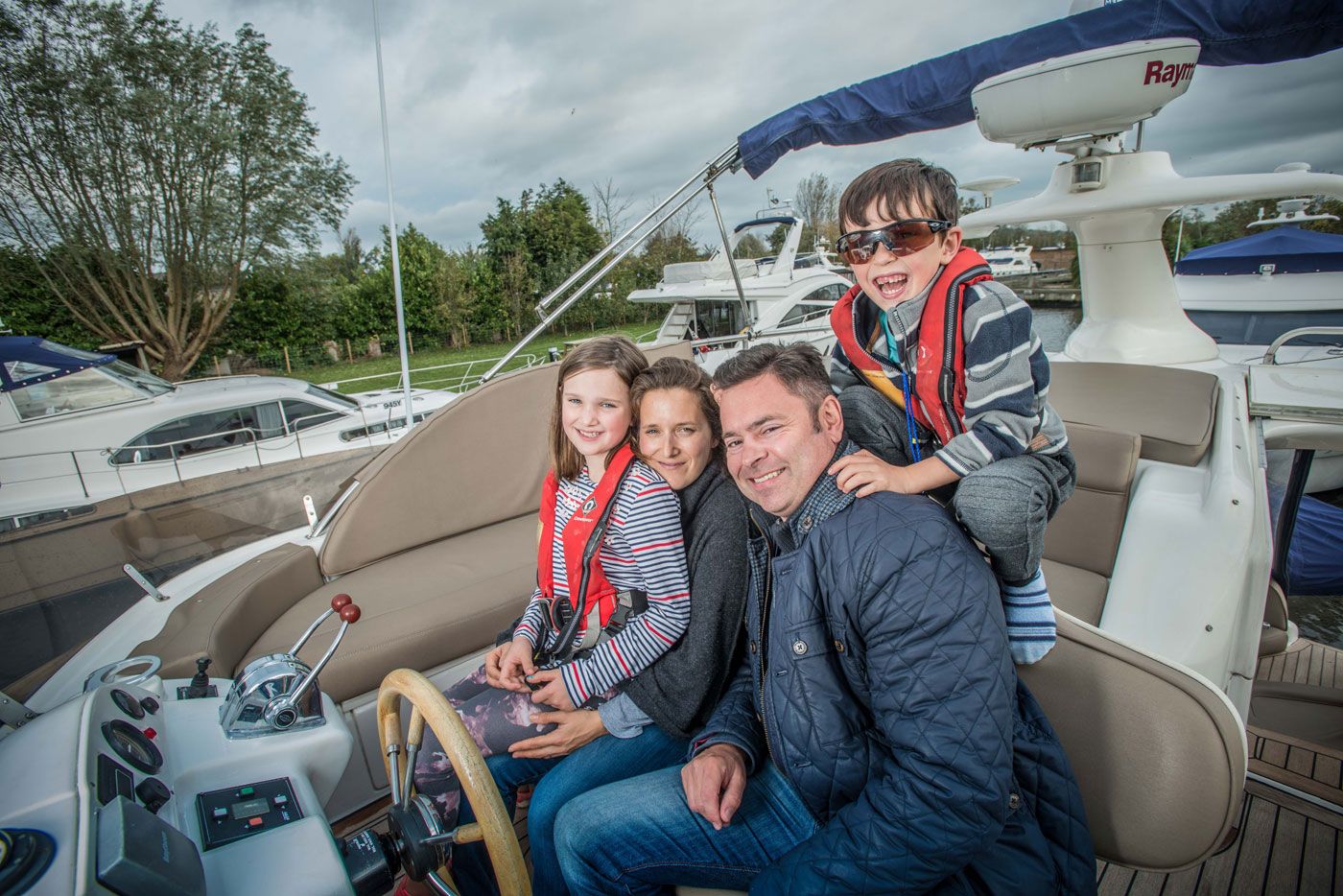 Sean, 45, adds that Ben is an enthusiastic helper, despite his tender years: “He loves it all – he’s really taken to it and likes to try to help and have a go at the steering and with the ropes, though he’s a bit young.” While Sean has a long association with the Broads stretching back to childhood – his boat-owning parents live at Horning – his wife Hannah’s only previous boating experience was two charity tall ship races more than 20 years ago. “My Godmother and her husband are big sailboat people, and when I was 17 their neighbours sponsored me to do the tall ships across the Baltic Sea for three weeks,” she says. “Bear in mind I hadn’t even been on a bus on my own at that point, but it was great fun. I did another around Portugal when I was 22. I admit I’m scared of the sea, and it didn’t cure me! I still have a healthy respect for the sea.”

Two decades on and Hannah found herself back at sea after a visit to Sean’s parents at Horning, a pretty village in the heart of the Broads, ended with the couple buying their own boat. Sean, managing director of a company that makes fire testing equipment, blames a “midlife crisis”, but Hannah says: “For the whole 20 years we’ve been together he’s wanted a boat – it was always a dream we would get a boat.” 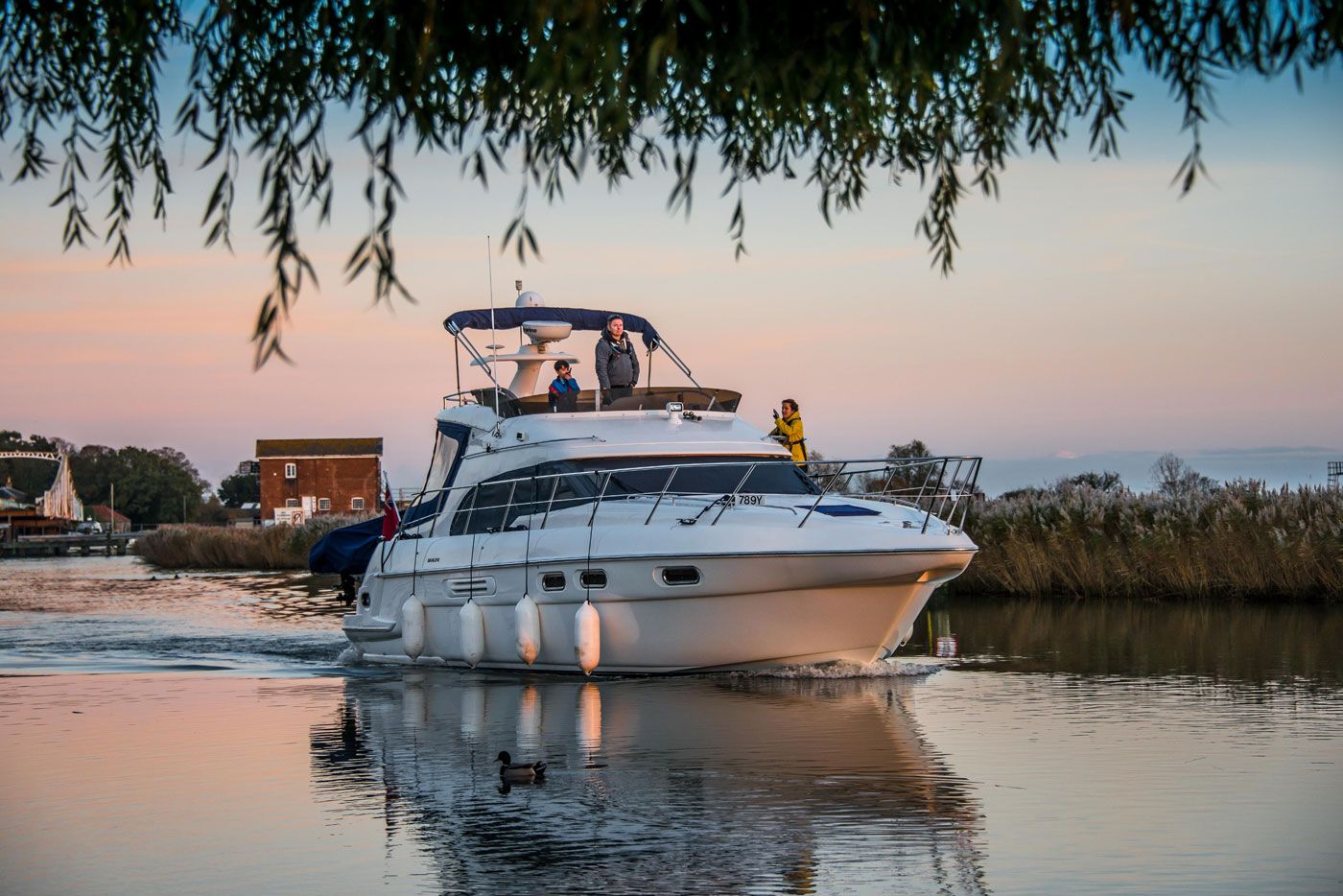 “I was brought up with my dad owning Broads boats,” says Sean. “As a boy, I would help with mooring and general stuff. He didn’t let me steer – and he still doesn’t! Every time I came up to visit we would go round and look at the boats at Norfolk Yacht Agency (NYA), but until a couple of years ago I suppose I had never seen one where I wanted to take that leap and buy it. But when browsing the boats for sale in Norfolk, we saw this Sealine 365, which was a bit of a project boat, and put in a relatively low offer. I didn’t expect it to be accepted, but it was and so we ended up with a boat! The kids were five and seven, so at an age where they were going to enjoy it.”

At the time, the boat was called Kir Royale, Hannah’s father’s favourite drink. “Because it was my dad’s favourite drink, we thought someone’s telling us something here, and we got her for a bargain price,” adds Hannah, originally from Somerset and now living in Sussex. “It all happened a bit quickly. Then we were suddenly part of NYA, who are all really friendly and professional, and that helped a lot.” 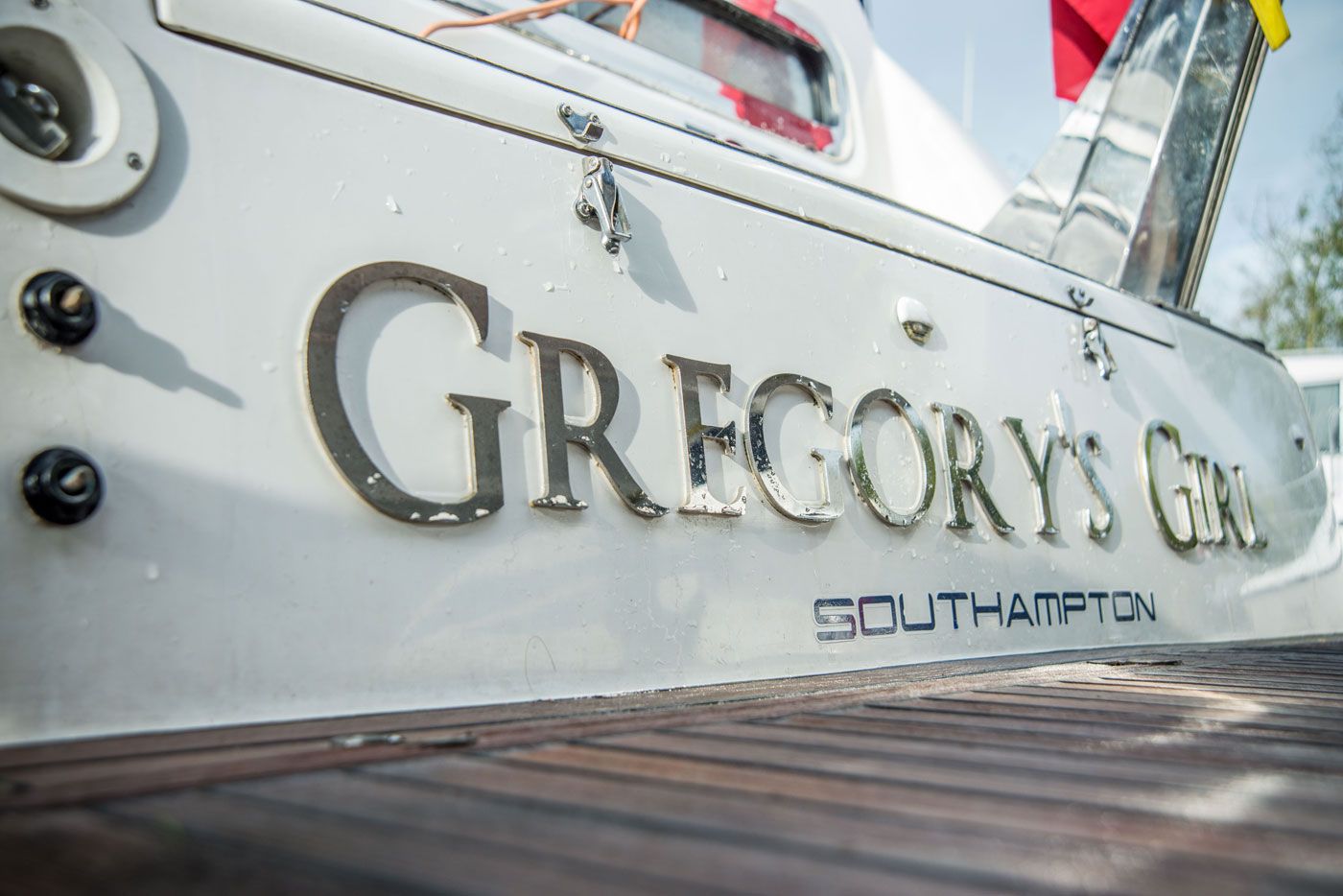 The 1988 boat was renamed Gregory’s Girl, and work began to renovate the decking and headlining while Sean and Hannah got to grips with learning the ropes. Both undertook the two-day Powerboat Level 2 course, which teaches basic boat handling including launching, mooring, anchoring and recovery. “We thought, if we’ve got this boat, it’s good to learn how to do it properly,” says Hannah. Needless to say, things didn’t always go to plan in the early days – helming a 10-ton boat for the first time can be quite a challenge. “To be honest, I was rubbish,” says Sean. “I’d literally only had it about a week and I was moored next to the Reedham Ferry, came off the mooring, went to turn and got blown straight into it. It jumped out at me! Mooring can be quite daunting when you first do it, but now it’s fairly straightforward as long as it’s not too windy, which can be challenging.” 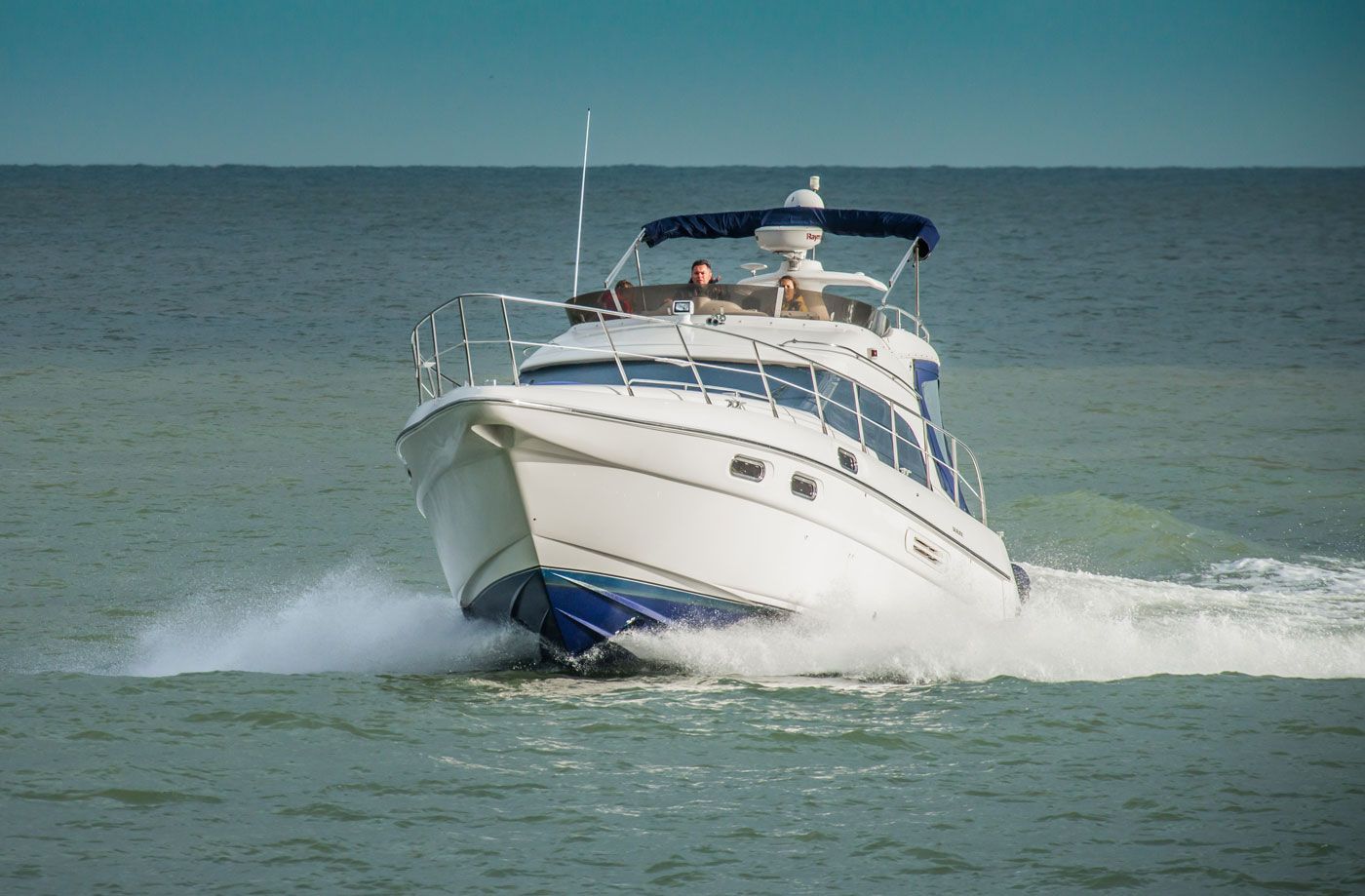 After years of river cruising on his parents’ boat, Sean was itching to get out to sea. “I got into dinghy sailing and windsurfing at school, and did all of that at sea,” he says. “I did all the river stuff with dad back in the day. It was a nice way of spending some time, but I was always going to be seagoing if I was going to get a boat myself. At sea, you will see stuff that you would not see from the land. It’s interesting, exciting and something different. The first proper trip we did was the East Coast trip with the NYA cruising club in early spring 2016 after we’d been working on the boat over the winter. The kids loved it – there were kids of a similar age to ours and they all got on well. They are a nice bunch of people and great with the kids.”

Despite her natural, some might say healthy, fear of the sea, Hannah says NYA takes the pressure off inexperienced boaters and allows them to enjoy the thrill in a safe environment. “They take the pain and the stress out of it,” she says. “It could be really stressful organising bridges and knowing the tides for mooring, but they do all that and nothing is too much trouble. They’re very careful to make sure they include everybody and make sure it’s great fun for everyone. There’s a real contrast between the slow, peaceful Broads and the exhilaration of being at sea. Being out at sea when you can’t see land, and you’ve got all these other boats around you is a bit of a blast. The fresh air, the birds gliding along next to you – you see the world in a different way, and you feel safe because you’re in a group of people. It’s also really good for the children socially. Even though it’s not the cheapest of sports, it’s great fun as a family thing.” 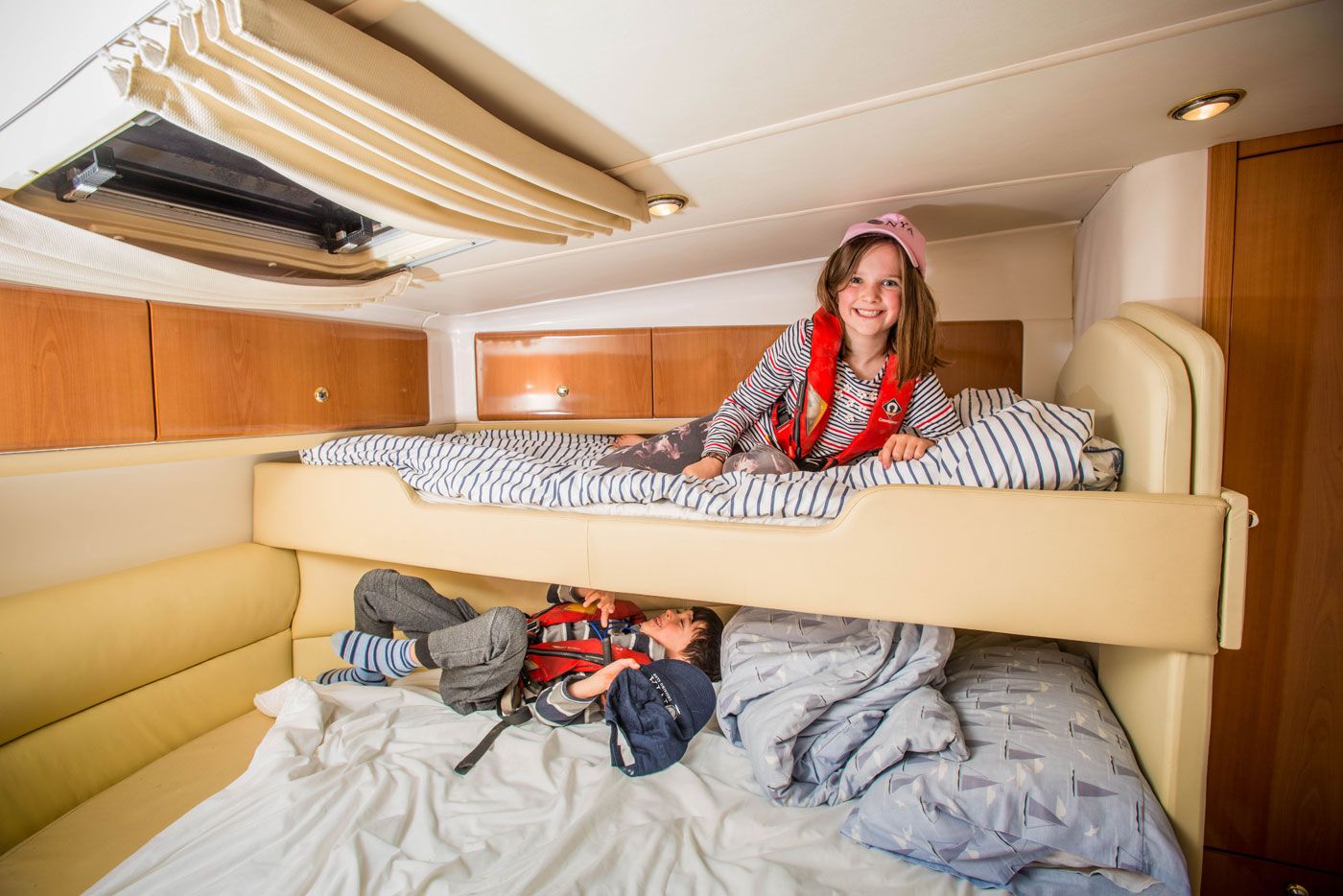 After those early adventures at sea, though, it was clear that Gregory’s Girl was not the ideal conveyance for the type of trips the family wanted to take. “Really, the engine needed rebuilding and, once we started doing sea work, it was not man enough,” says Sean. “The twin 200s didn’t have enough guts to bowl along at 18-20 knots. We thought we either do a lot of work or upgrade it. James (from NYA) knew we were looking and did me a deal on the Sealine F43.” The new boat, also called Gregory’s Girl, had more space inside, more power, nearly an extra 7ft bow to stern, and would make its first major voyage to Brighton to be nearer the family home.

“Because we live in the south, we wanted to get the boat down to Brighton, and the old one was not going to make it,” says Sean. “Although we’d done a bit of sea work on our own, we booked a guy called Roger Hindess, who teaches the Powerboat Level 2 course, to come with us because it was a long way and I still didn’t fully know what I was doing. My mum and dad came, but it would have been a bit adventurous to take the kids on a long trip straight away. We would go out from Brighton, and it was nice having it nearby – we got used to it – but we wanted to do all the NYA cruises this year so we brought it back in March.” 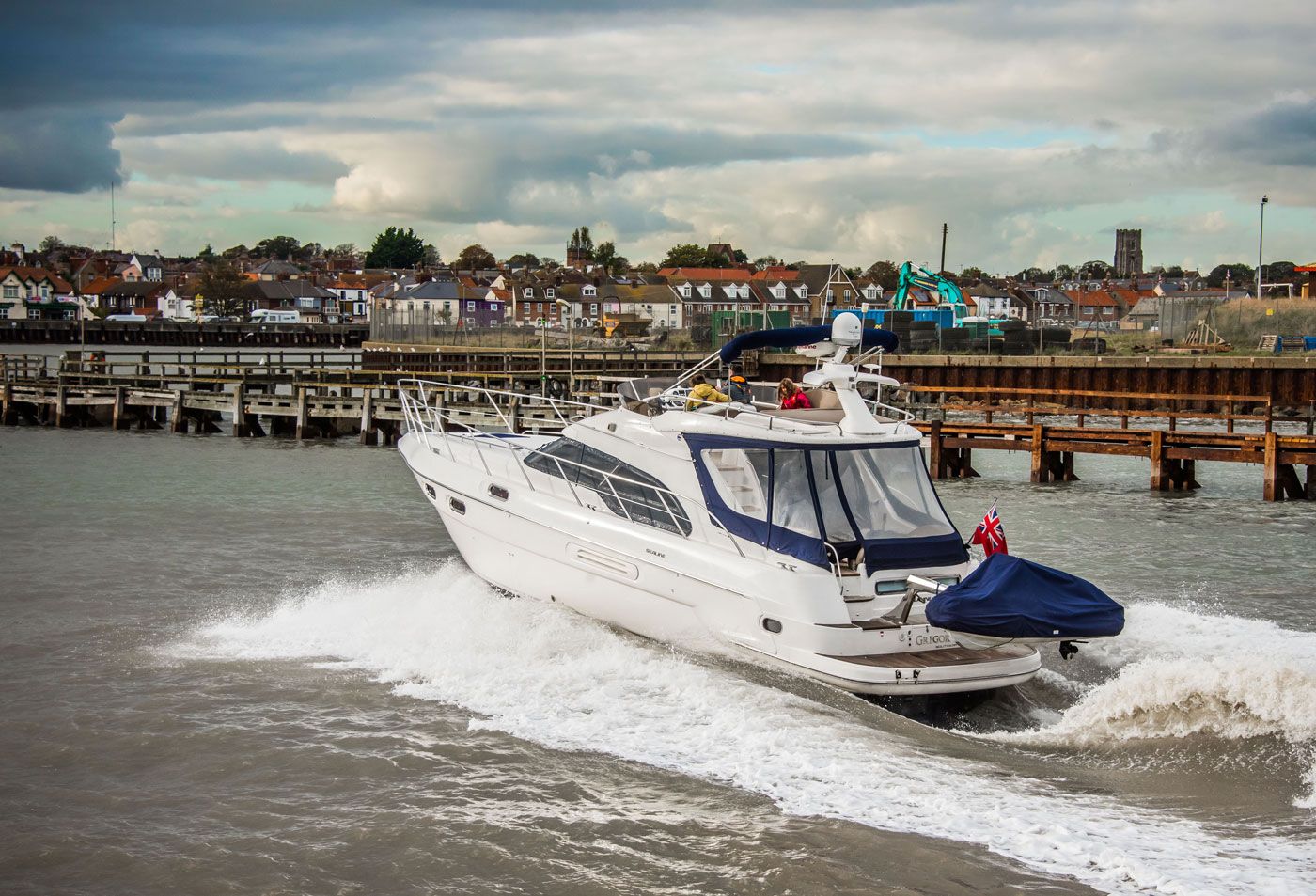 As well as the organised cruises, with greater experience the family have also undertaken lone trips, taking advantage of the sense of freedom afforded by the open water. “We’ve done quite a bit of stuff on our own,” says Sean. “I often talk to people and they say ‘that was brave’. It’s about weighing up whether it’s bravery or stupidity and staying on the right side of it! I would say do the cruises so you have that experience, and then you can do it for yourself. The only time we’ve encountered rough weather was on the way back from Wells, but it was OK because there were six or seven boats around us. One minute I had got the shorts on, sunbathing, and we could see in the distance a wall of something. I went from sunbathing to waves coming over the front of the boat.”

The thrills and adventure of the sea are matched by the experience of cruising up the Thames in London after mooring in St Katherine Docks. “The cruise goes to St Kat’s for a week, and I’ve got a head office near there,” says Sean. “I travel abroad a lot for work, and I literally left St Kats and jumped on a plane to somewhere. Hannah and the kids stayed on the boat for an extra week and the following weekend we took it all the way to Windsor. Seeing London from the Thames, seeing Hampton Court and Windsor Castle, is stunning.” 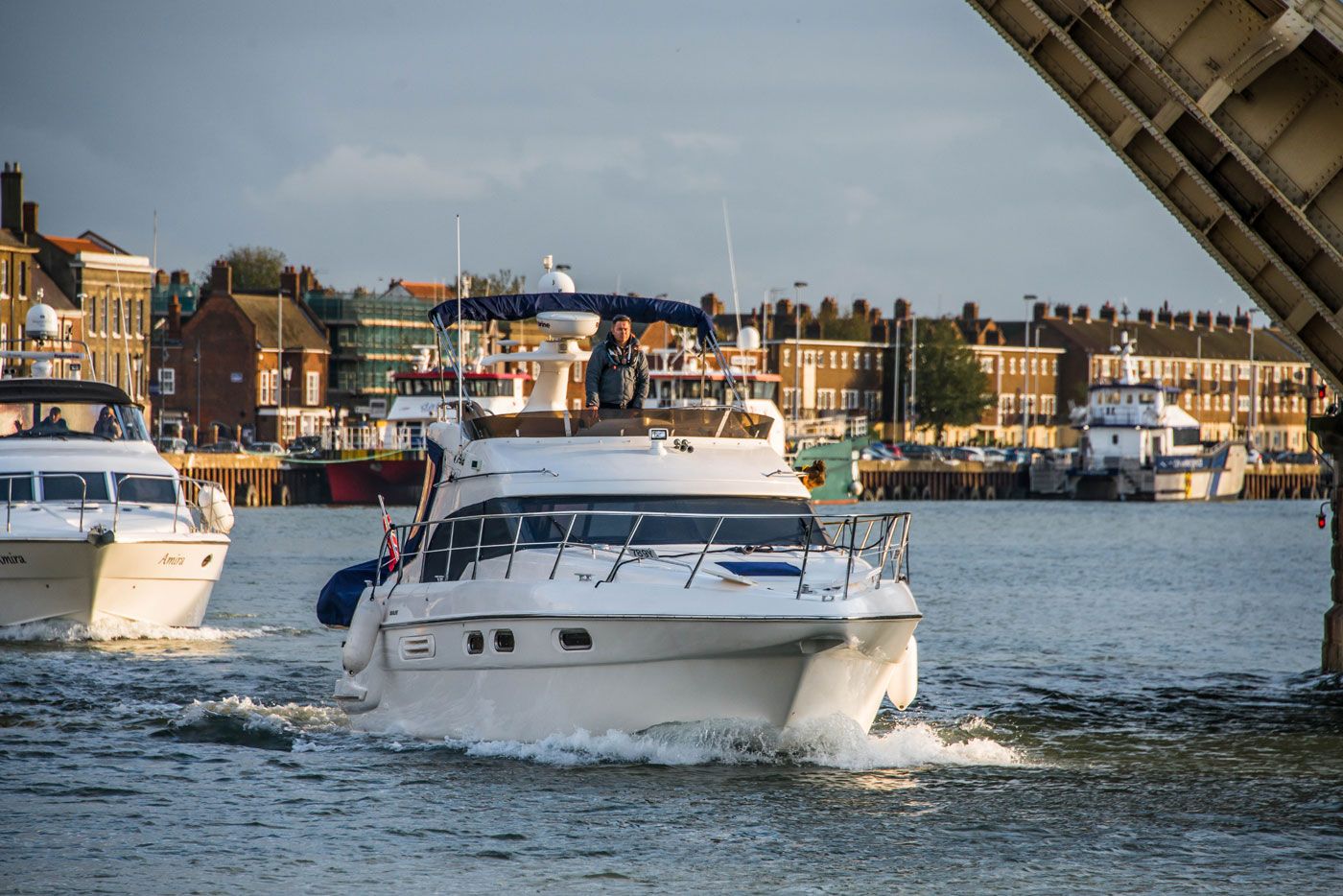 Gregory’s Girl has proved the perfect venue for entertaining friends, some of whom have never been on a boat, and the social life is an important aspect of the boating experience. “It becomes a passion, but for me, it’s more about the social life than the actual boating,” says Hannah. “I wouldn’t want to be apart from it now. We’ve made friends and become attached to people quite quickly so we can’t get rid of her really. We would probably come along even if we didn’t have a boat.” 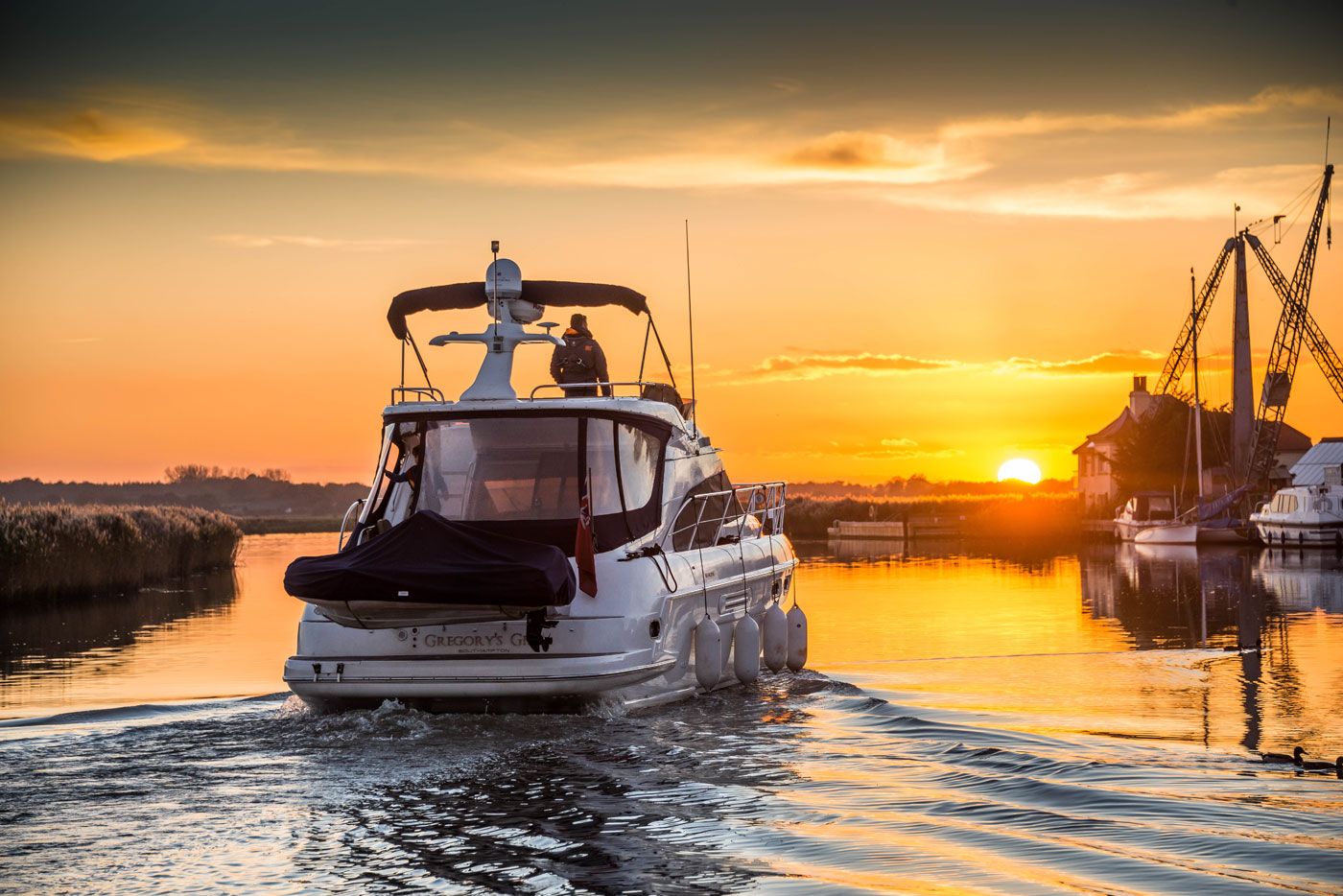